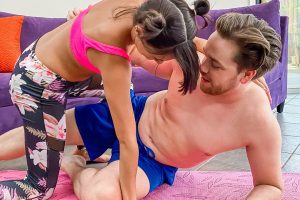 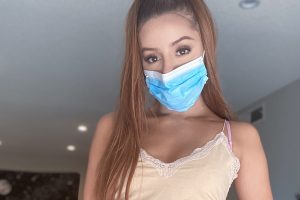 One feature of such big studio houses is not just the quality of the video but also the quality of the acting and content. This site does not disappoint on any front as it gives you great storylines with amazing acting and video quality of the highest definition. After watching a few videos, we did feel that some storylines were getting repetitive and that’s predictable given that they are focusing only on couples stuck at home. However, that did not take away anything from the videos in general.

At about a dollar per day, this site is quite cheap when compared to other sites. Moreover, when you consider that you are not just getting access to this series, but access to more than 40 series, all produced by Team Skeet, it is a legitimate steal. All of these sites when combined will give you new videos literally every day.

When you arrive at the site, the first thing that strikes you is the pleasant colour scheme. While the background is predominantly black, the colour scheme for names of the videos and models is a very pleasing purple and pink colour, with different buttons actually having the entire gradient. This subtle touch gets you in a mood which is difficult to describe but makes you look forward to some pussy-wrecking action with even more zeal.

The basic navigation around the site is pretty simple as they have different tabs to list their videos by movies and models. On their main page, the first cascade you see is of the newest movies they have on their site. This is followed by their most popular videos and then their newest models. At the top of the screen is a carousel which features some of the hottest videos and galleries on the site.

The model’s page does not have a lot of information about the models other than the videos from the site they have features in. However, a great feature of this site is that they provide previews of their videos. These previews range from a minute to around two minutes and contain the best bits of the video to get you riled up. The real seller is that these videos are in the same high resolution as the actual full-length videos.

If we are being honest with you, we don’t think that all of these videos were shot at the real homes of these people or that they are videos of real-time sex which occurred because they were quarantined together and bored. However, that takes away very little from the allure of these videos. Everything about the videos, from their quality to the setting to the models, is top drawer and we had a great time reviewing this site for you. Team Skeet rarely disappoints and they lived up their billing with this series as well. If you like POV porn even a little bit, you will love this series.

There is no trial available

Start making money by promoting this site. To promote this Site click the link above.

Disclaimer: All models appearing on this website are 18 years or older.

Protecting Minors: We are strong supporters of the RTA and ICRA, two of the most recognized self labeling organizations. Our site is properly labeled to assist in the protection of minors accessing inappopriate content. Furthermore we are supporting any company for the fight against child pornography. To report any kind of child pornography or inappopriate content, go directly to ASCAP!